I first visited the Alhambra at the age of 17. I was keen to see whether it was as breathtaking as I remembered. Our first sight of it came from the mirador at St Nicholas' church: 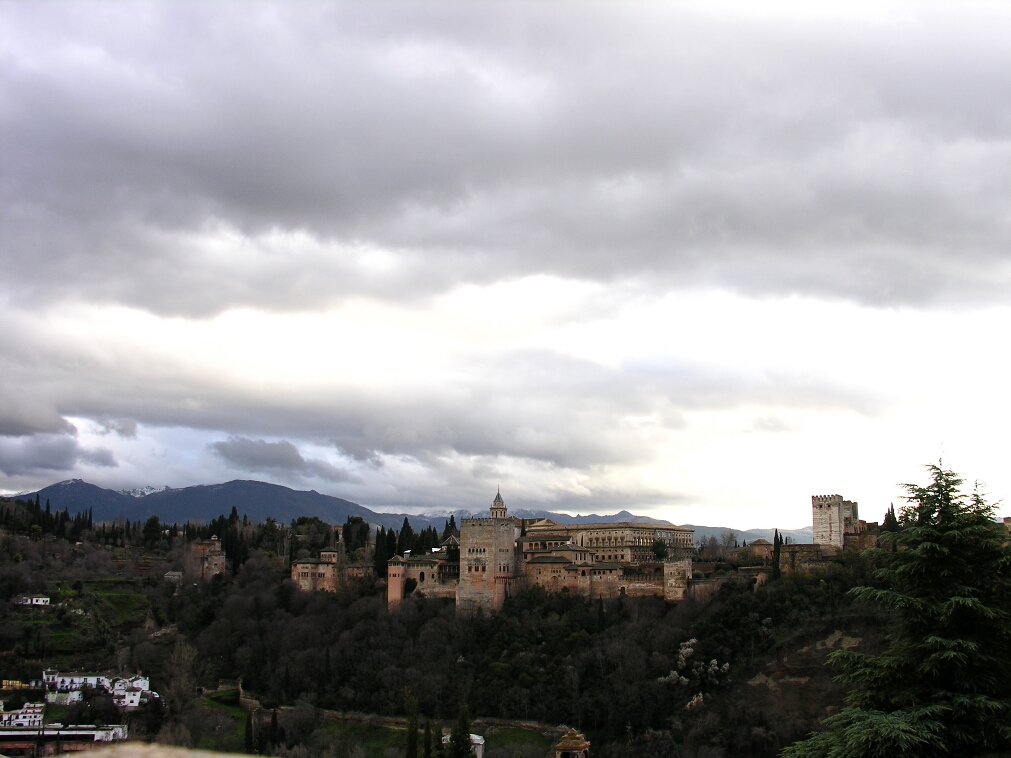 Here in zoom we can see the Nasrid Palaces and Carlos V's later addition: 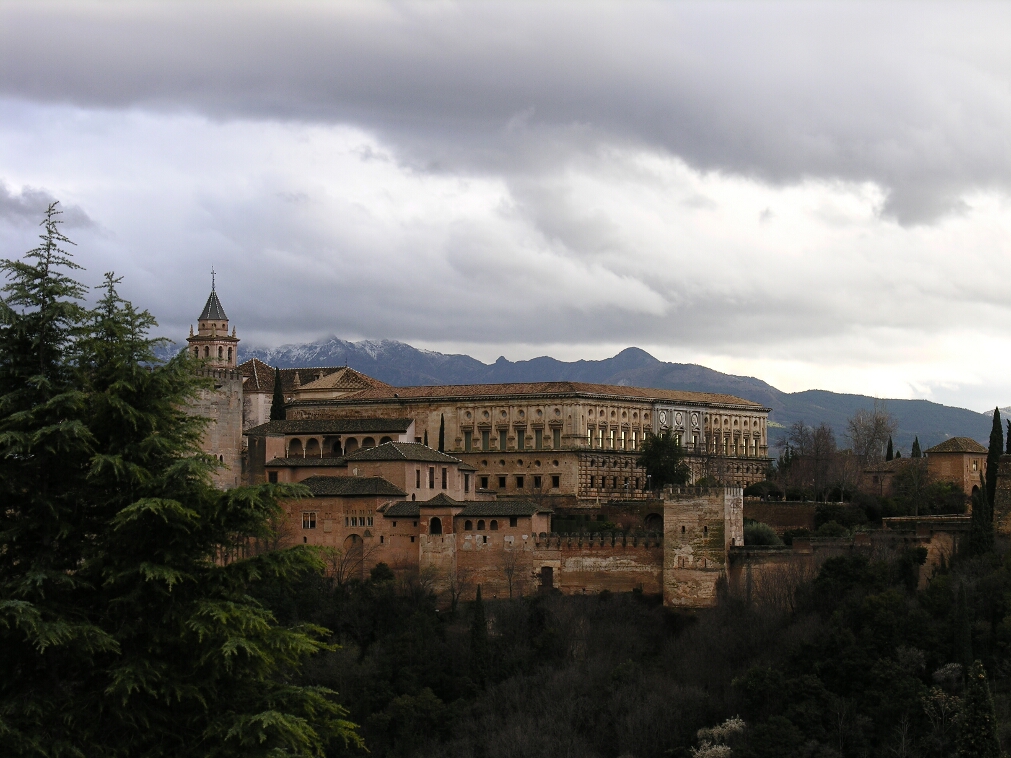 This is a panorama, stitching together three shots to show the whole hillside. You may need to use the horizontal scroll bar to see the right hand side of the picture.

You enter through the gardens. I wanted to know where I would be able to buy some of the bitter oranges I had been seeing everywhere on the trees. Like here. In the end, we would return home without getting any, so the marmalade will continue to be made with pink grapefruit. 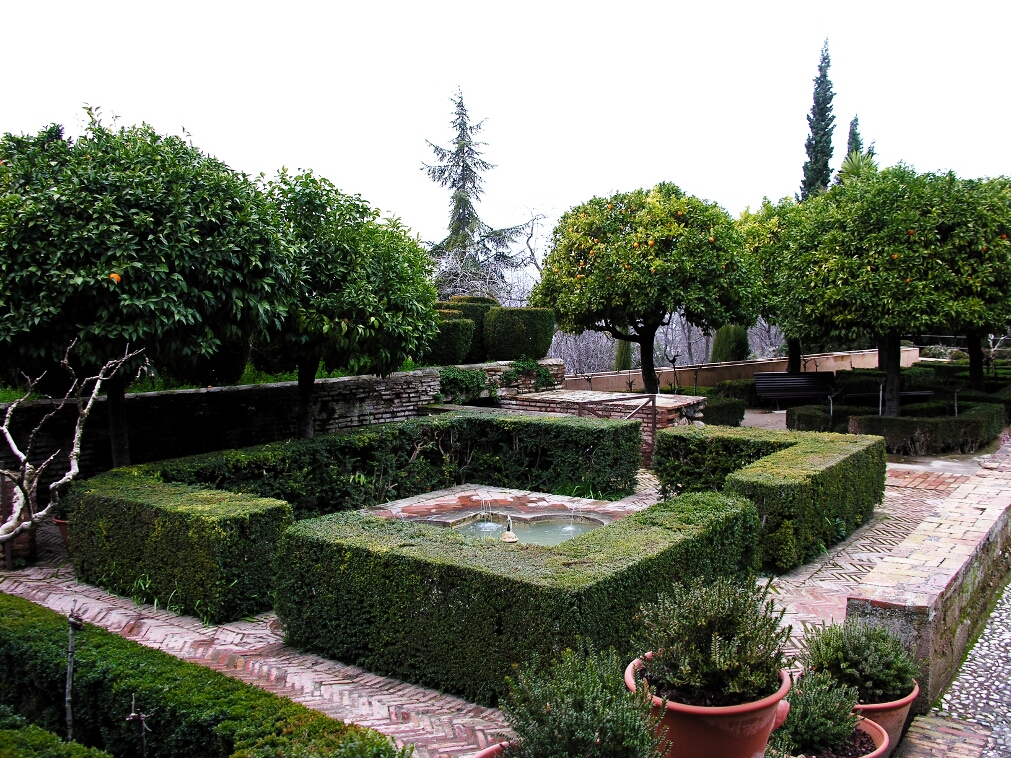 Here the hedges have been trimmed to look like giant sentries; through which you can see the Vega de Granada. 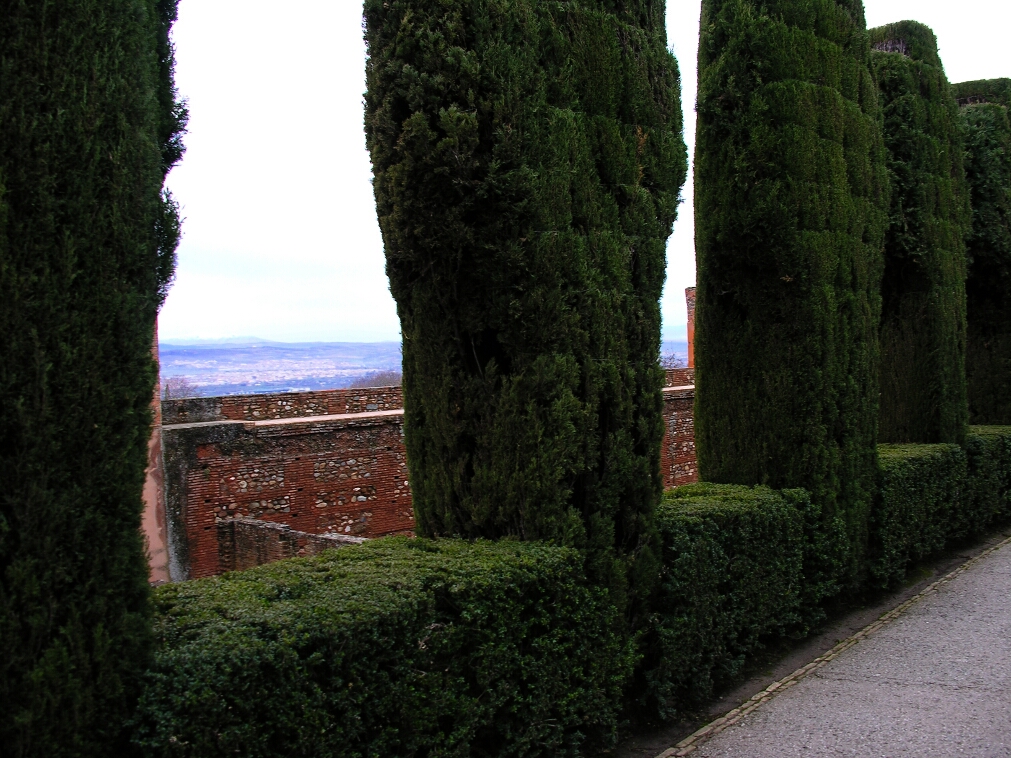 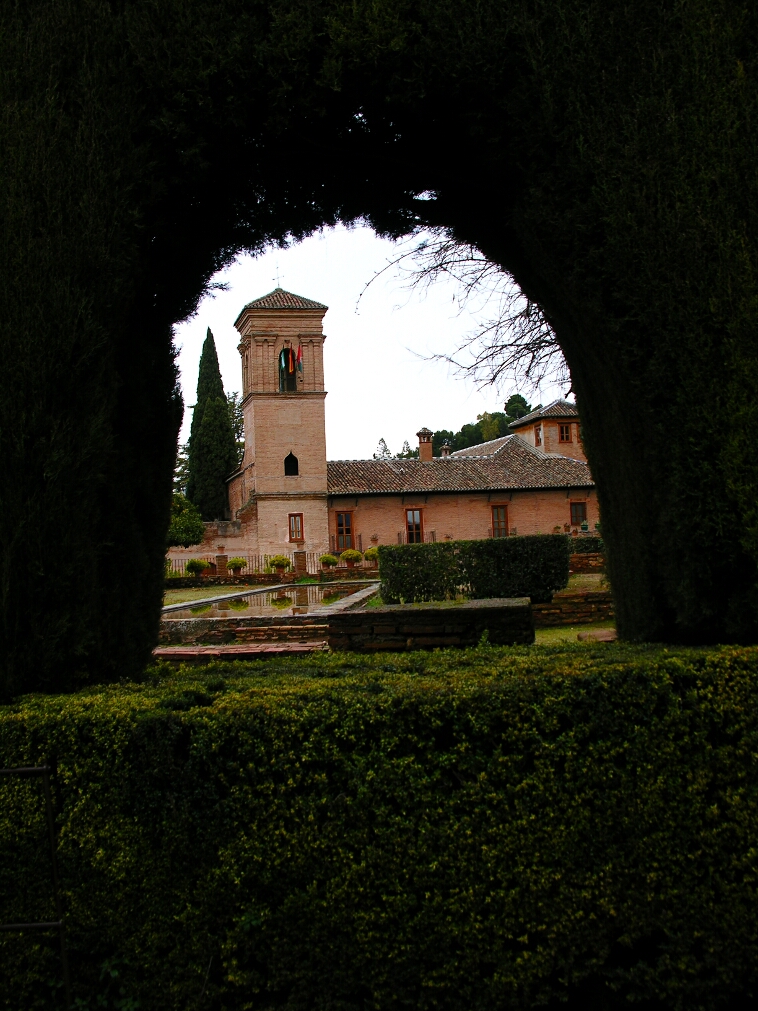 The Wine Gate, which leads into what is now the Plaza separating the Alcazaba from Carlos V's Palace entrance. 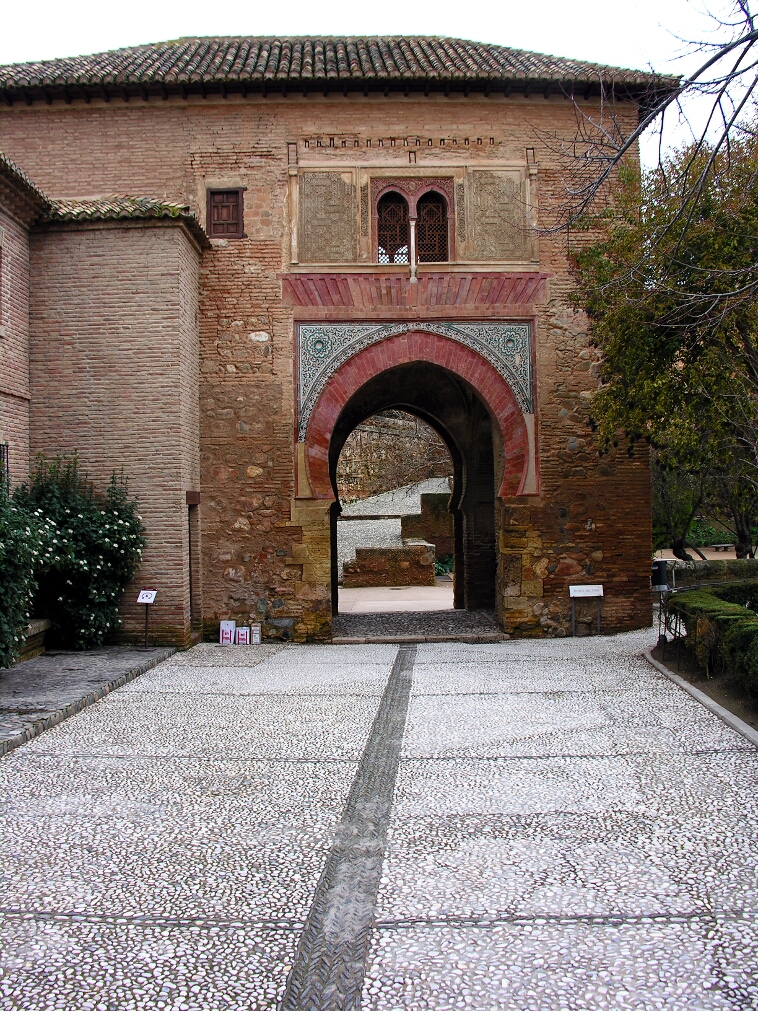 And here is the patio inside Carlos' palace. Our guide book is silent on why his plan to make Granada the new capital (at the time, that was Toledo) came to nothing. 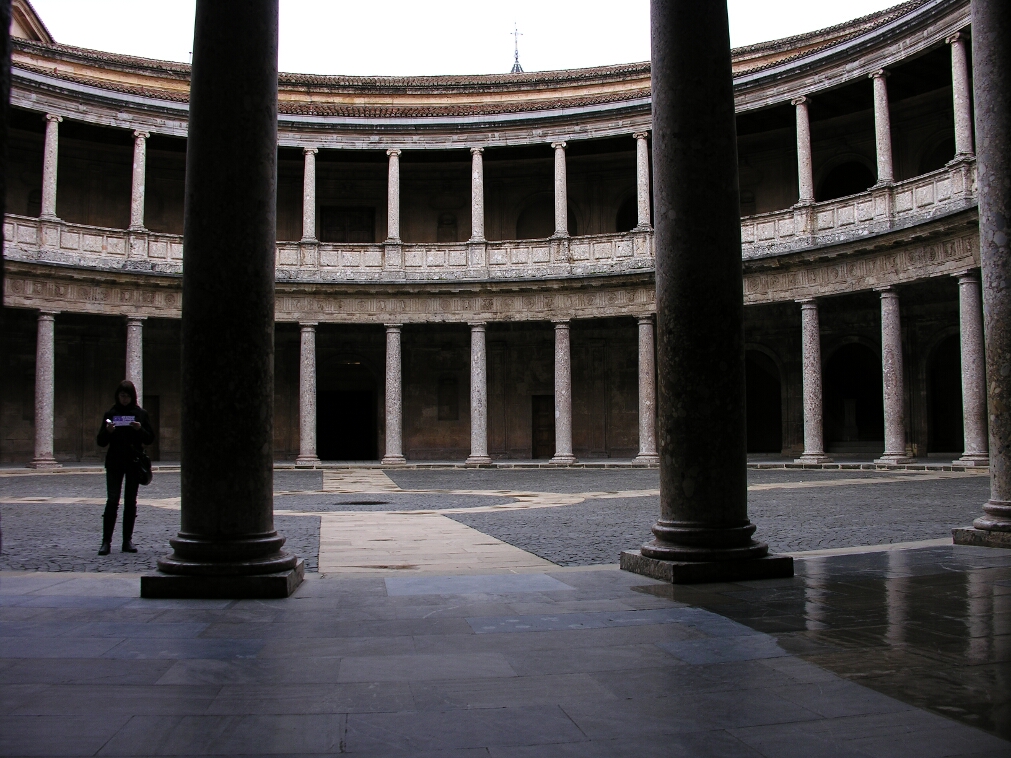 A view of the Albaicín from the plaza outside the Alcazaba 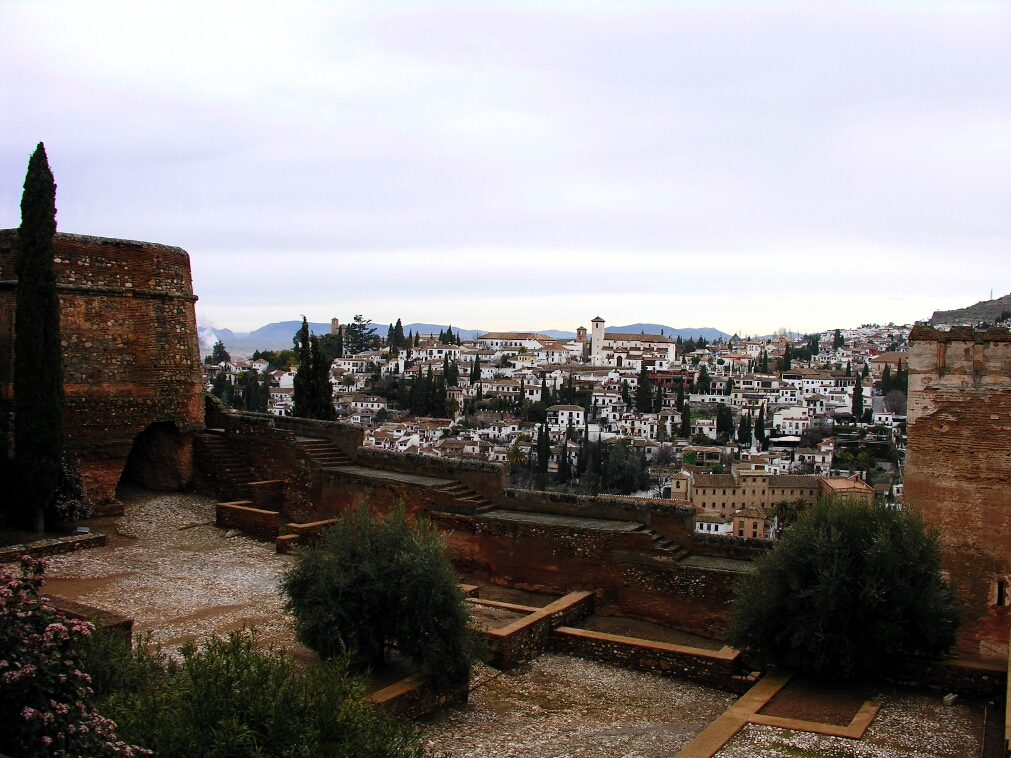 Here the Oratory. I have to admit I have touched up the photo to show the town through the windows. 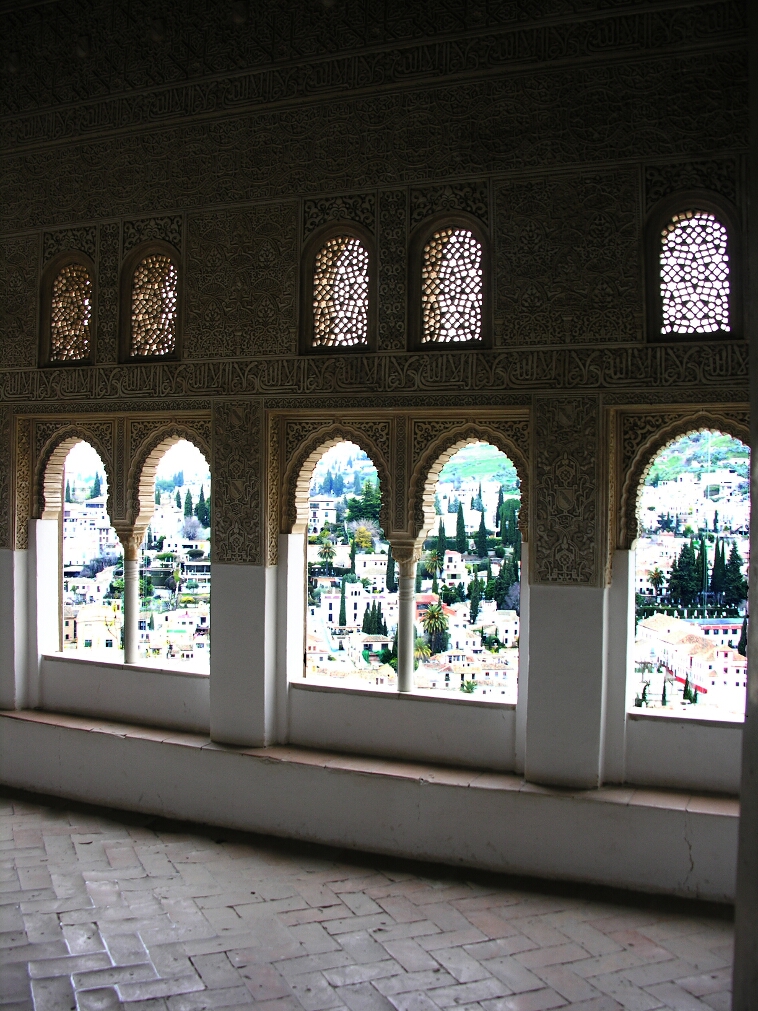 After the Oratory, the Patio of the Golden Room. It led into the Seraglio 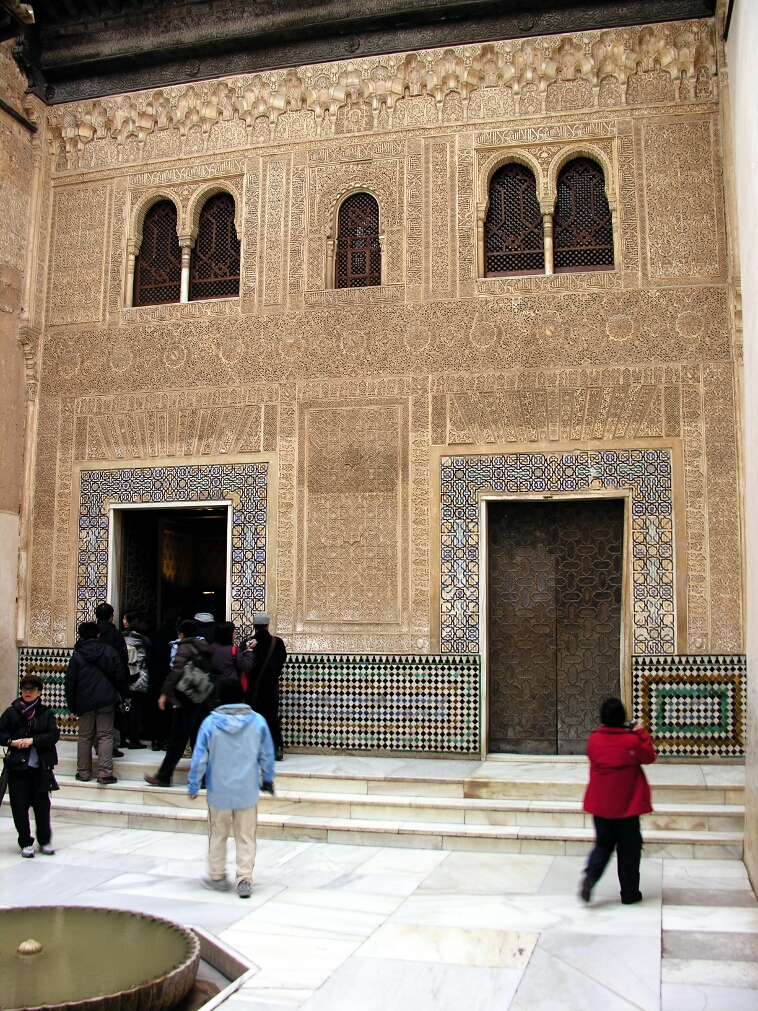 The patio is very decorated at each end - this shot looks back towards the door from the Oratory, and the Mexuar, where the Sultan conducted everyday administration. 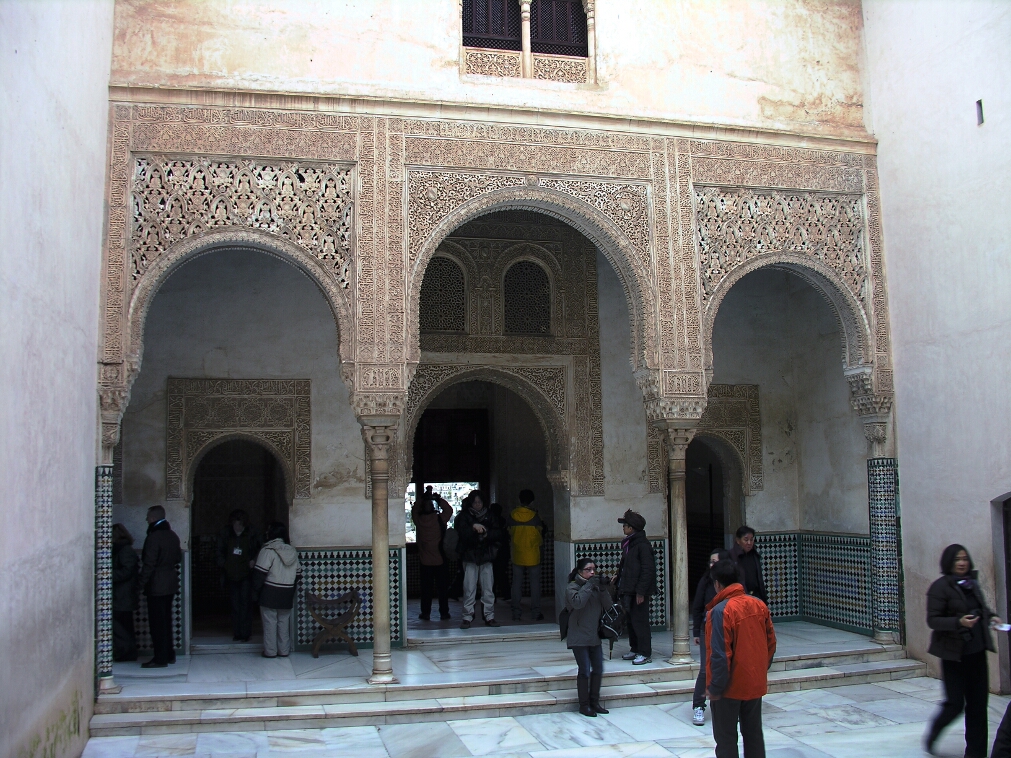 Ceilings, as everywhere in Andalusia, are extraordinary. 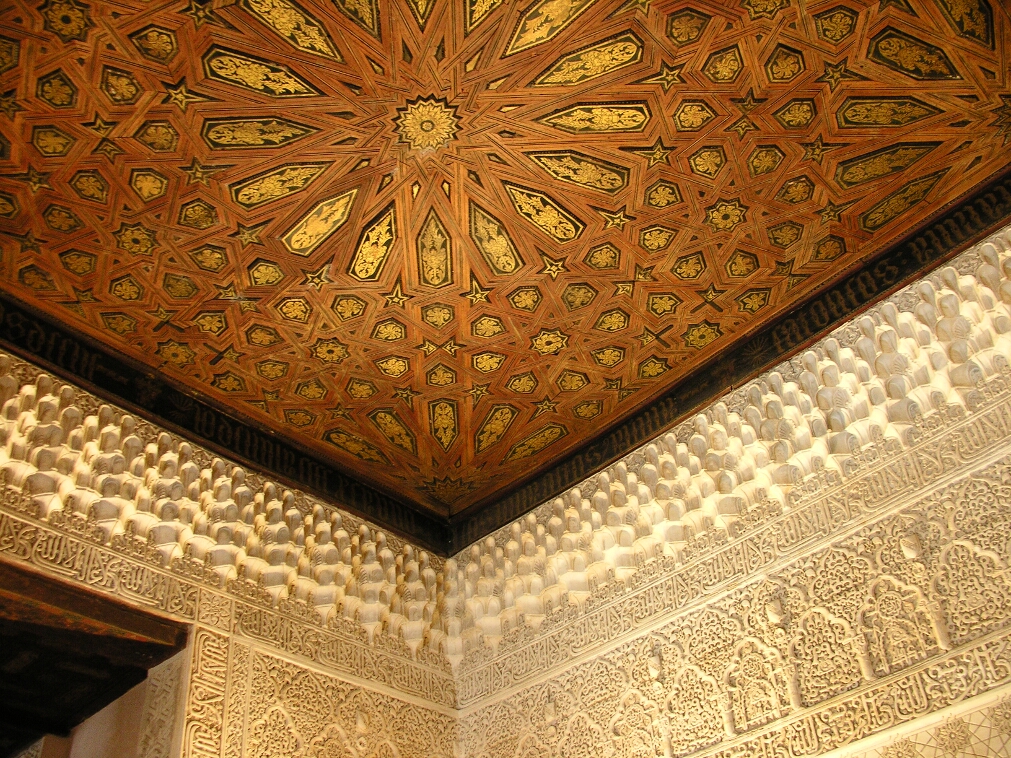 The court of myrtles. 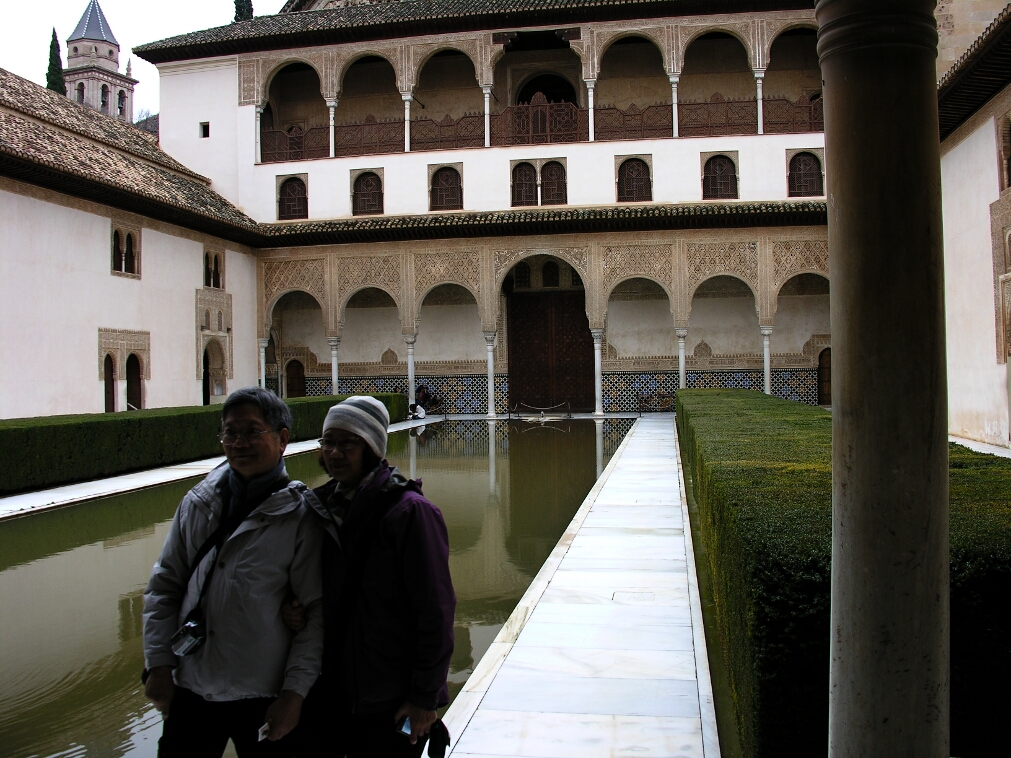 Here the ceiling of the "Hall of the Ship", so called for its resemblance to an upturned boat. 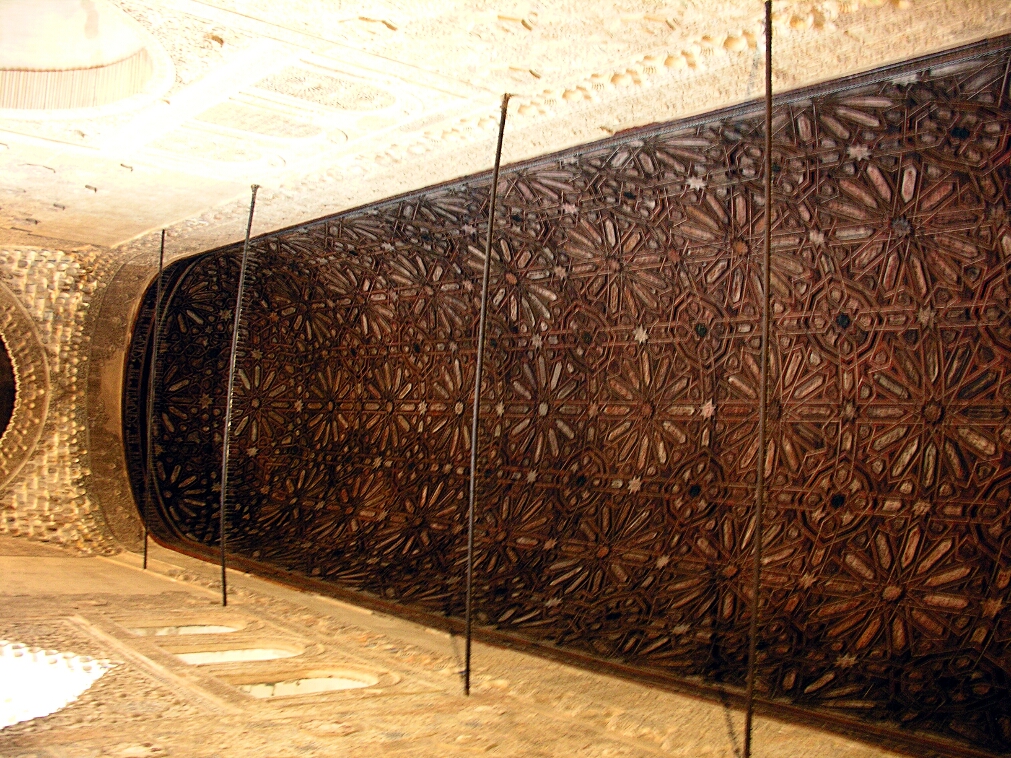 This is the Throne Room, or Hall of the Ambassadors, and has the highest ceiling in the palace. 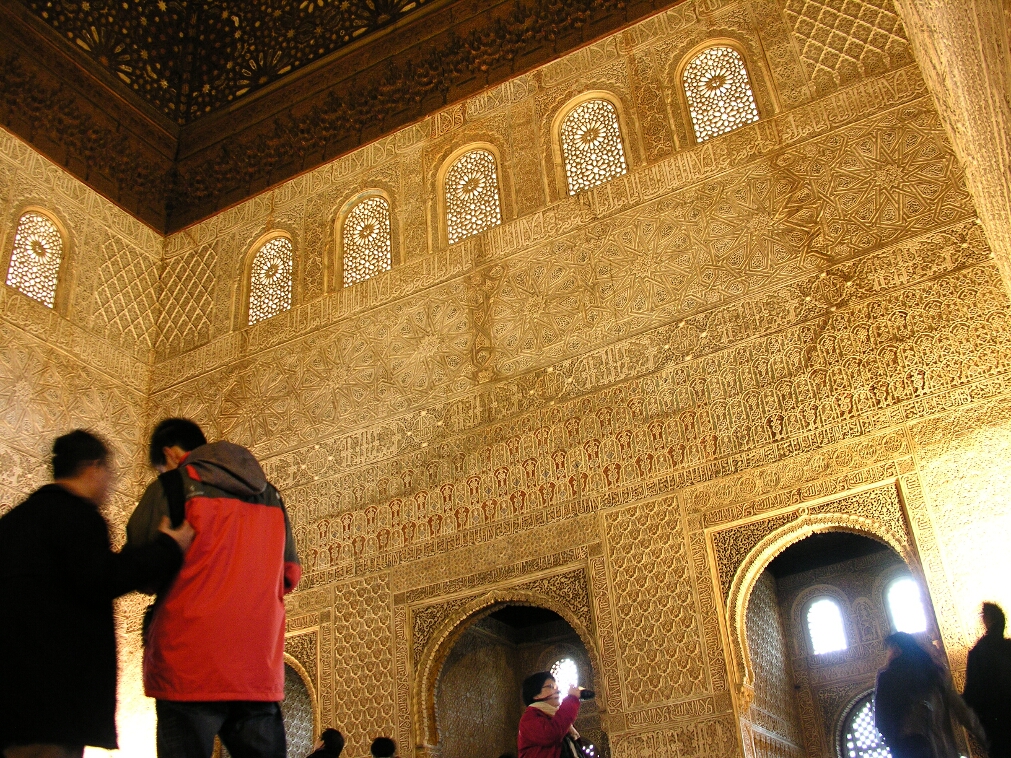 A detail from the wall decorations. A bit fuzzy, because the guards get very agitated about tripods, even my little pocket one. 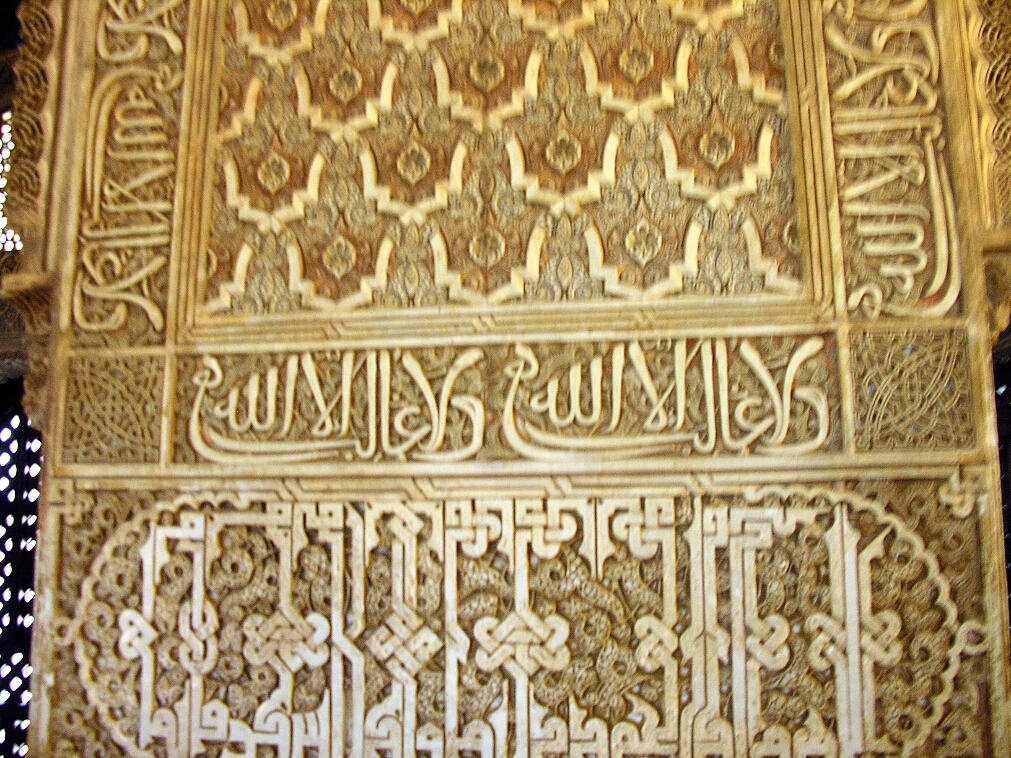 A decorated arch in the patio de los leones, which was being restored. For me, this was a major visual disappointment, because it had blown me away in 1966. Still, there are lots of other people who have published photos. I got 45800 hits from Google Images in response to "+Alhambra +leones". 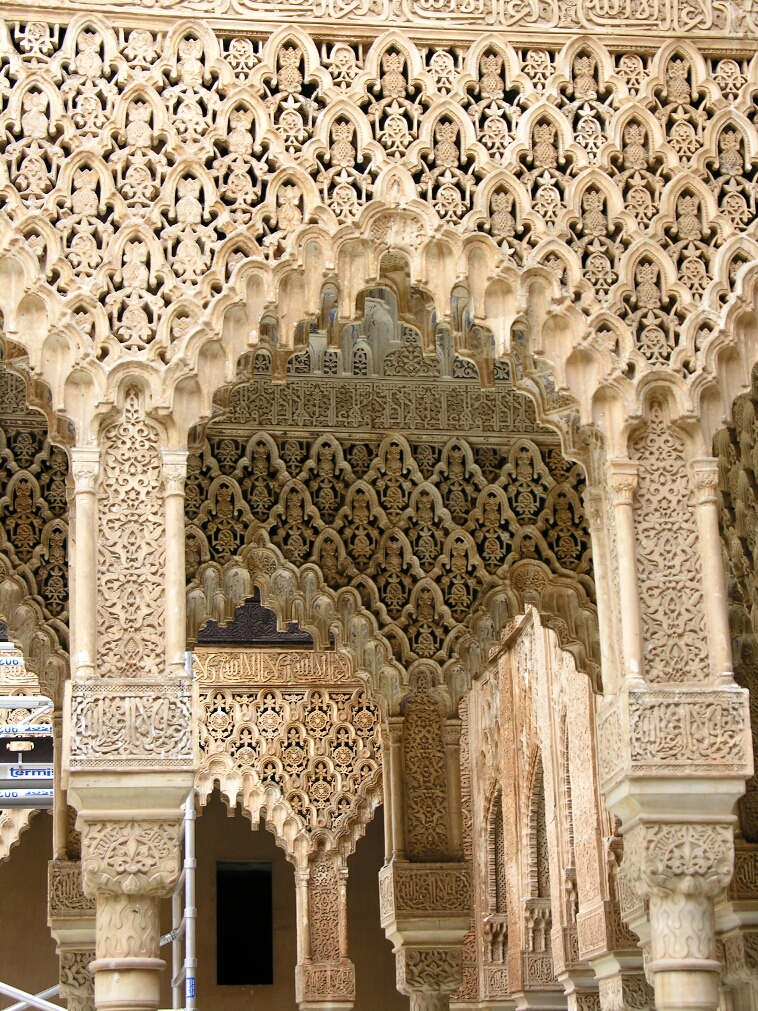 The ceiling of the Salon de los Abencerrajes, who were a leading family, until one member had an affair with the Sultan's wife. 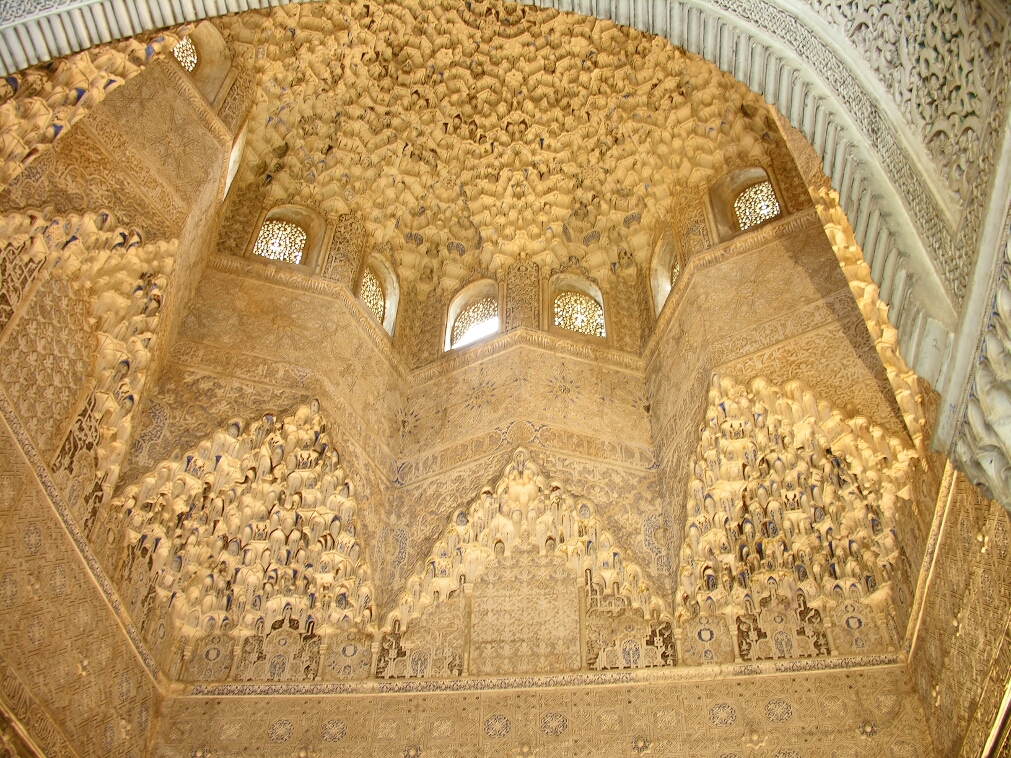 Fantastic decoration on the wall, as well. 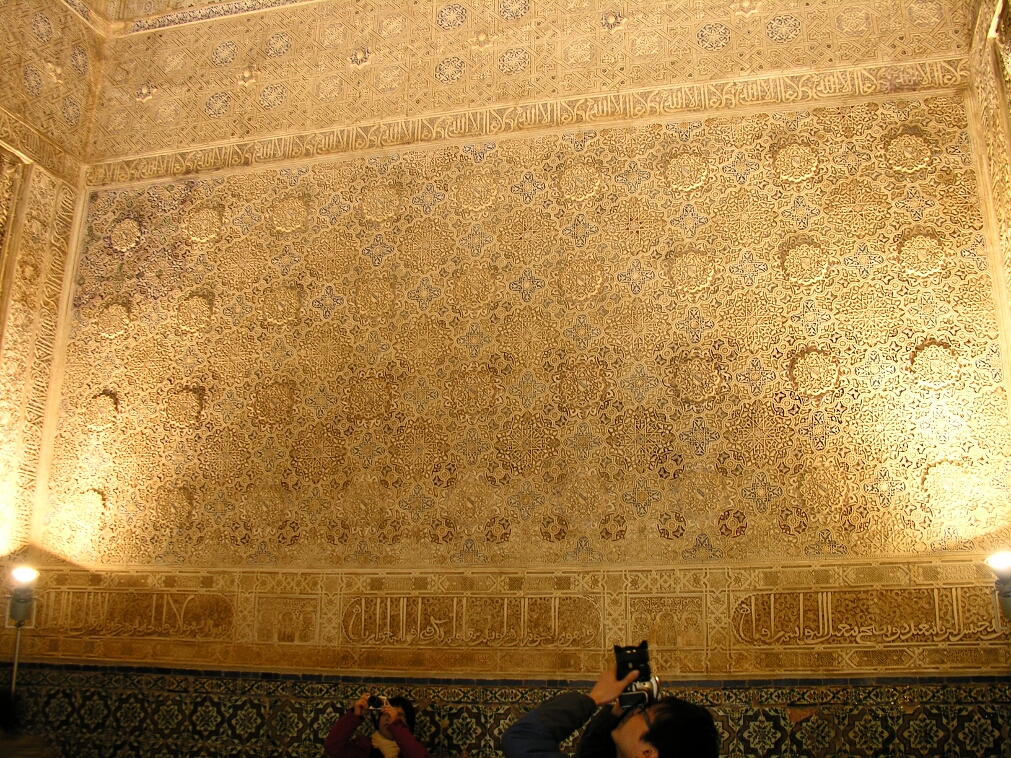 The arches lead to the sleeping area. 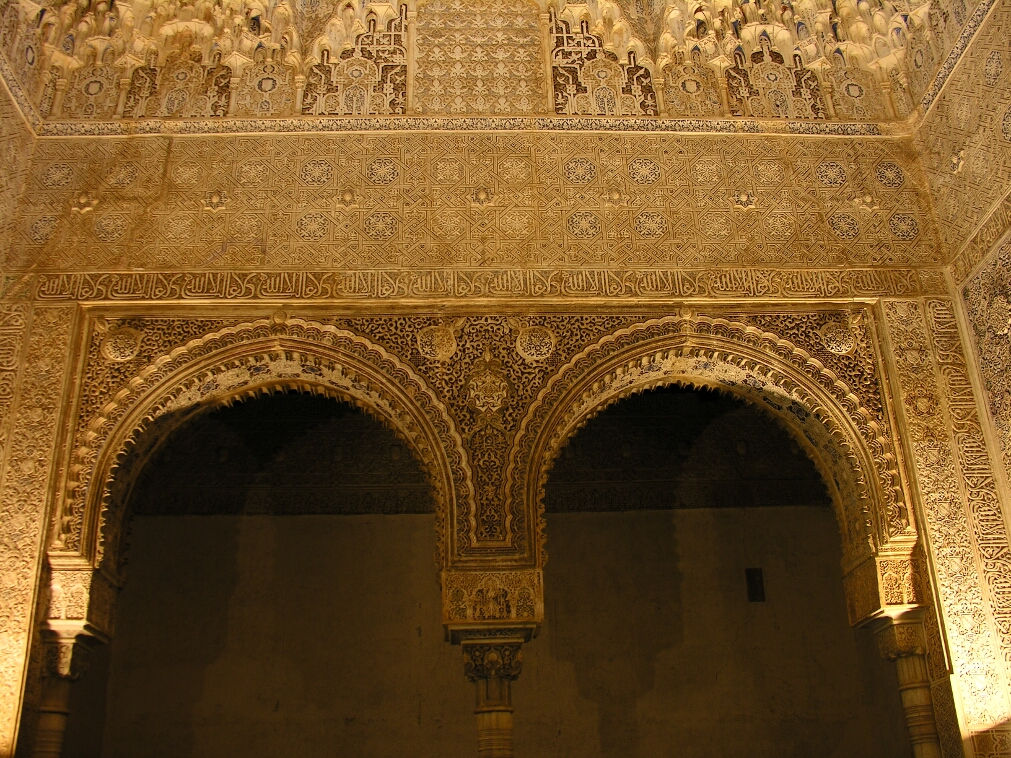 This is the Salon de las Dos Hermanas (the two sisters, from the 2 large slabs of marble in the floor). 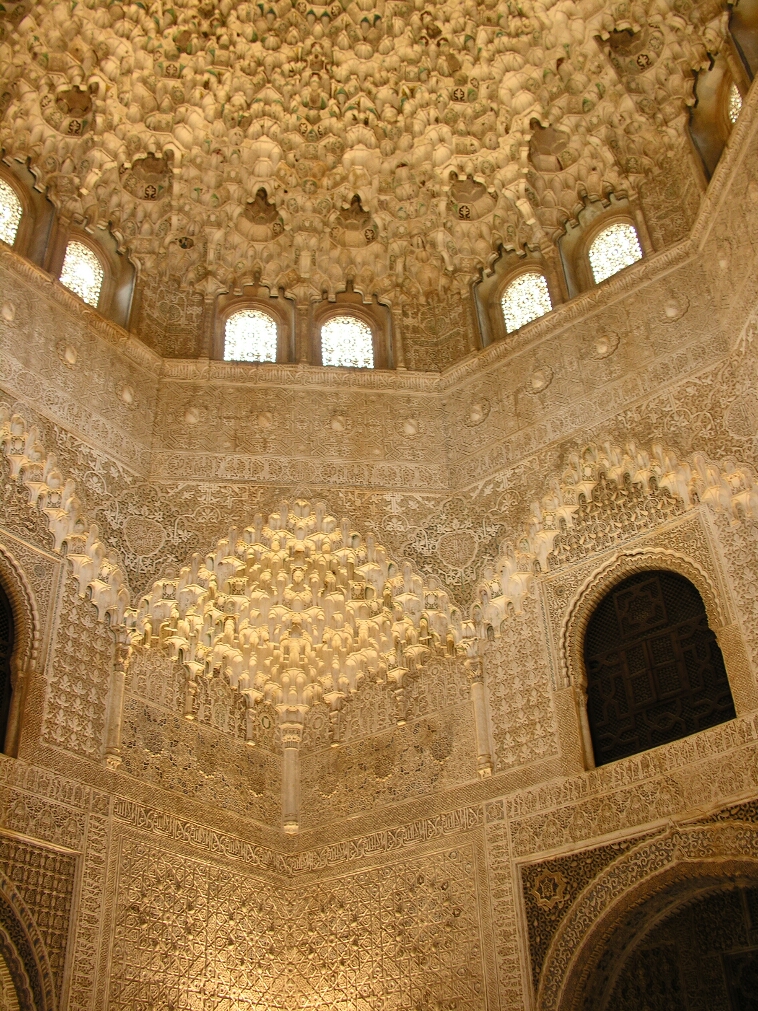 This old building used to be the coal-merchants' office, which later became the Corn Exchange. It has also been a theatre. Here the gate. 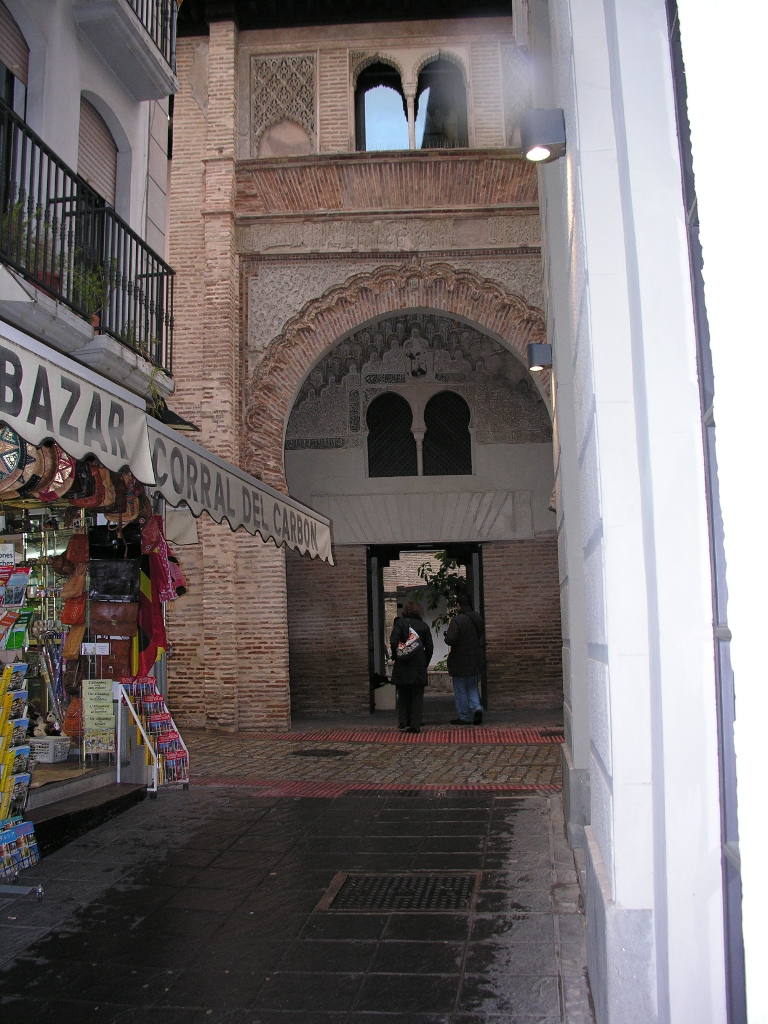 And here the interior. 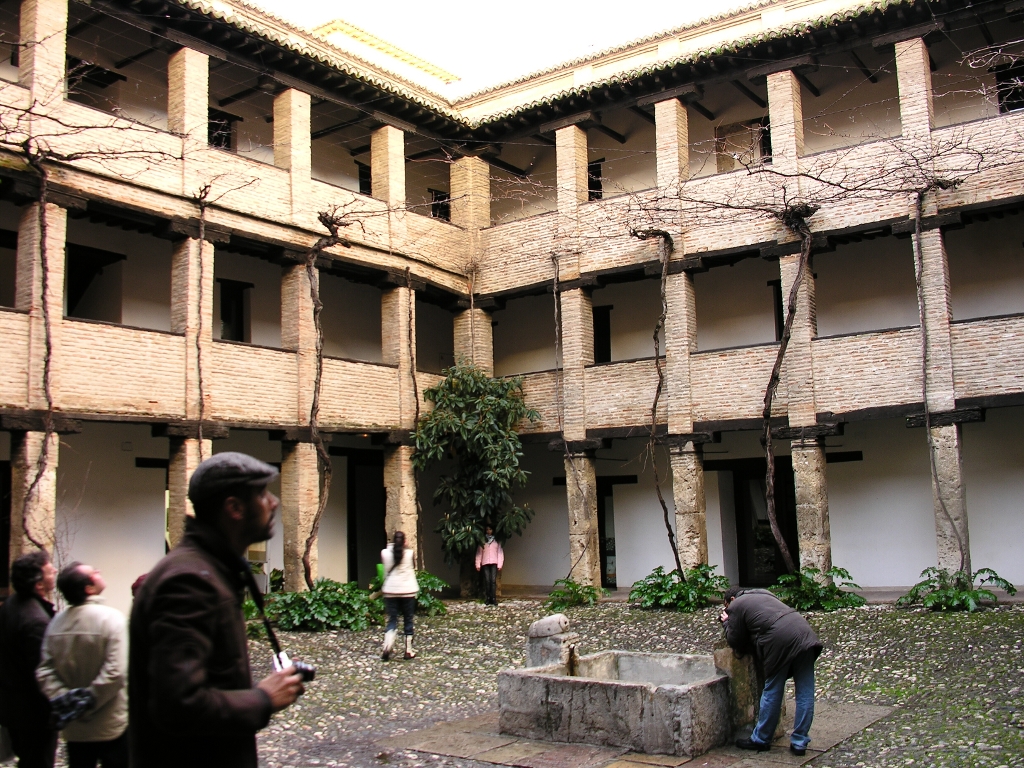 Chitra took us for a superb lunch just outside Granada, on our way back from Seville. One of the unusual features of the restaurant were the hundreds of jugs hanging from the ceiling. We never found out what that was about. 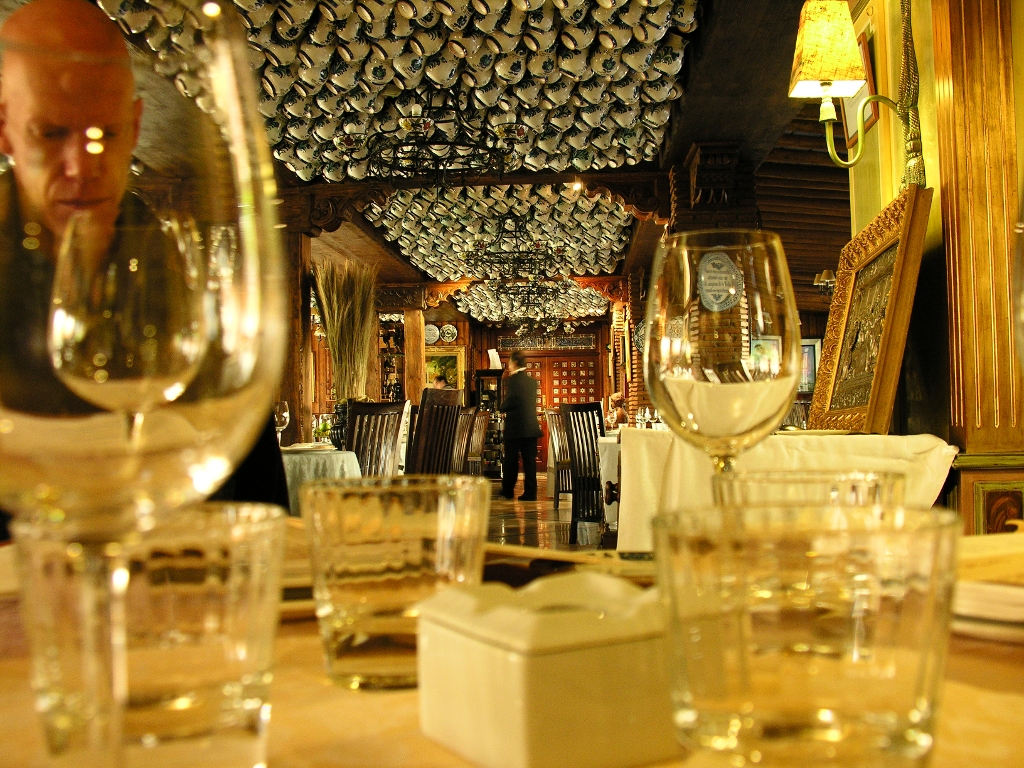 This is the College of St Catalina, now a part of the University of Granada 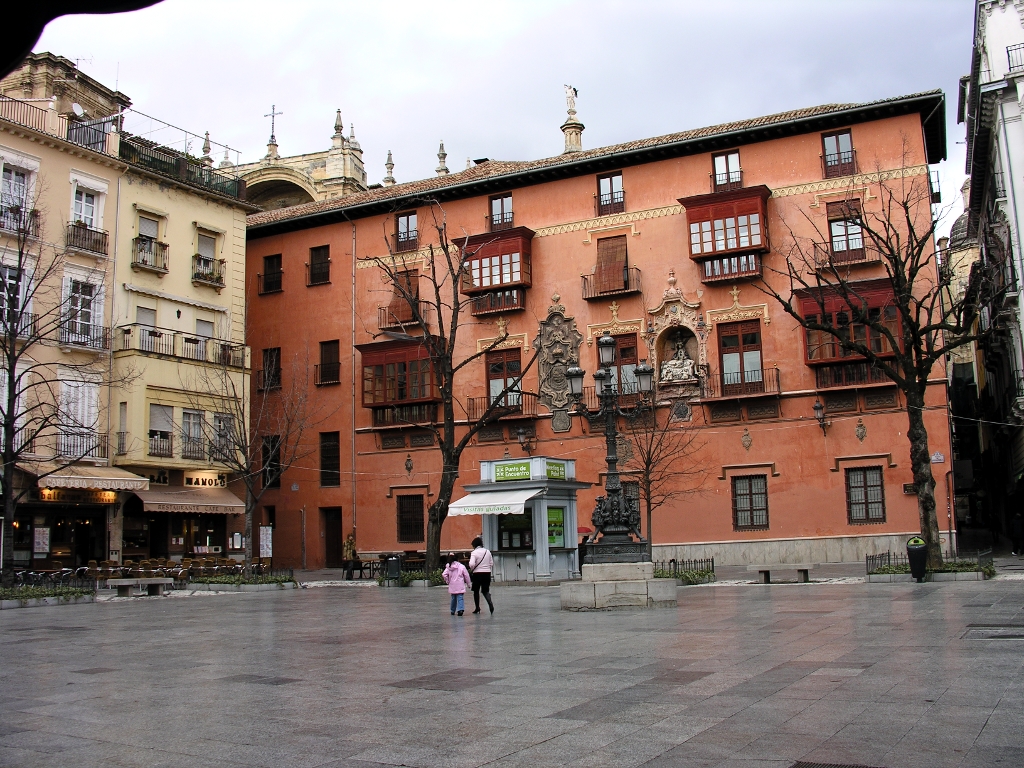 This the Church of Saint Giles and Saint Anne. Sadly, it was closed when we might have had time to visit it. 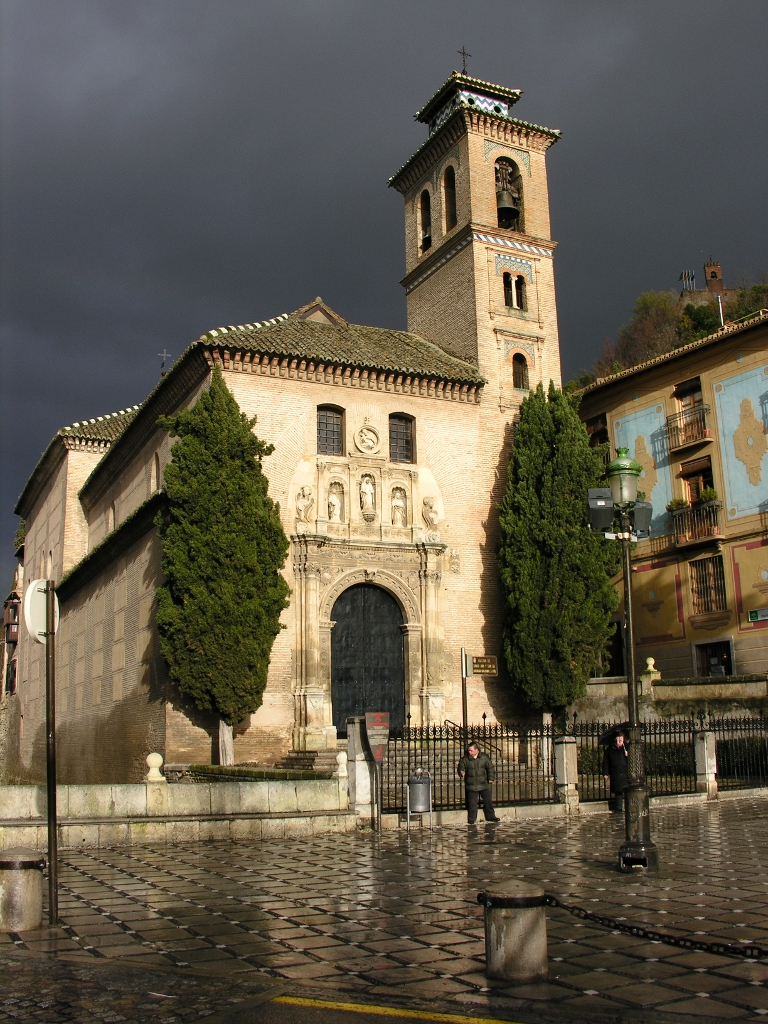 This shop has the quite inappropriate name of Blanco
. 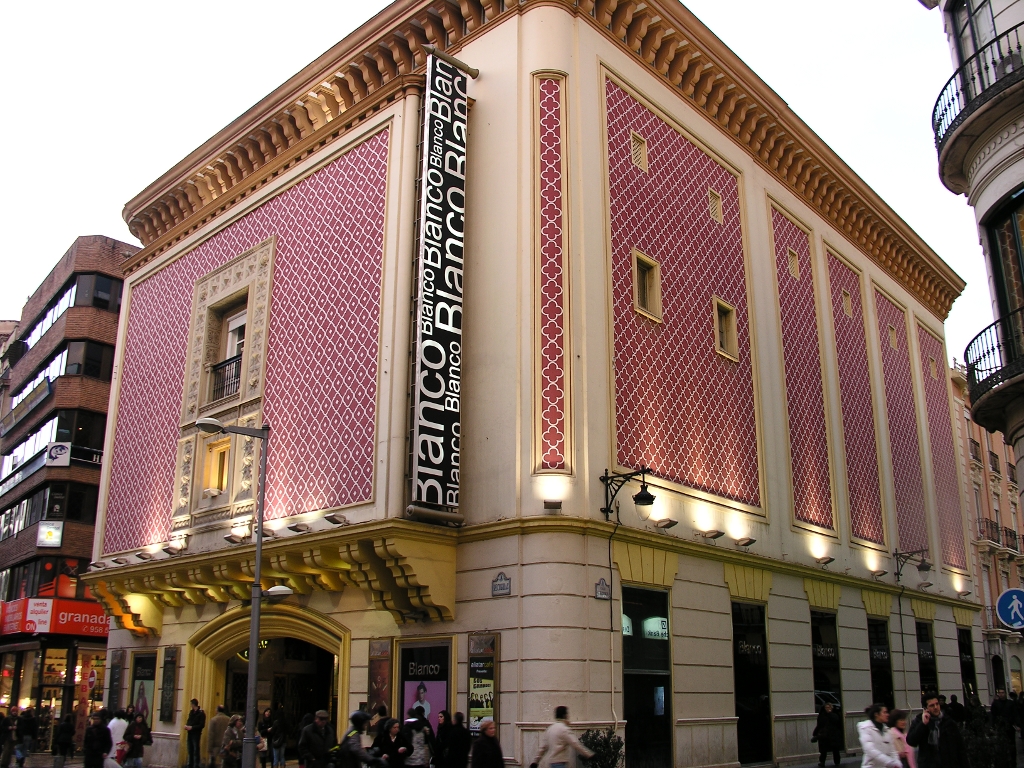 We were supposed to be able to see the Alhambra out of our hotel window. We could see the Sierra Nevada. 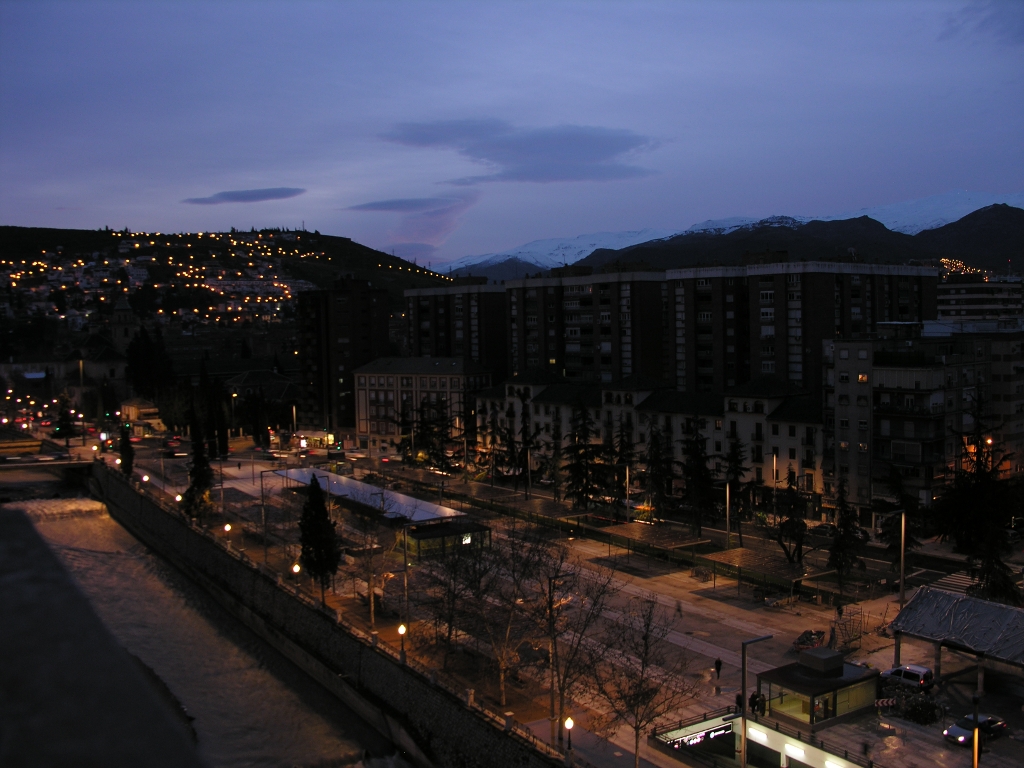 The last picture is the Real Chancellería, the first purpose-built court building in Spain. It still houses the regional Supreme Court for Andalusia. 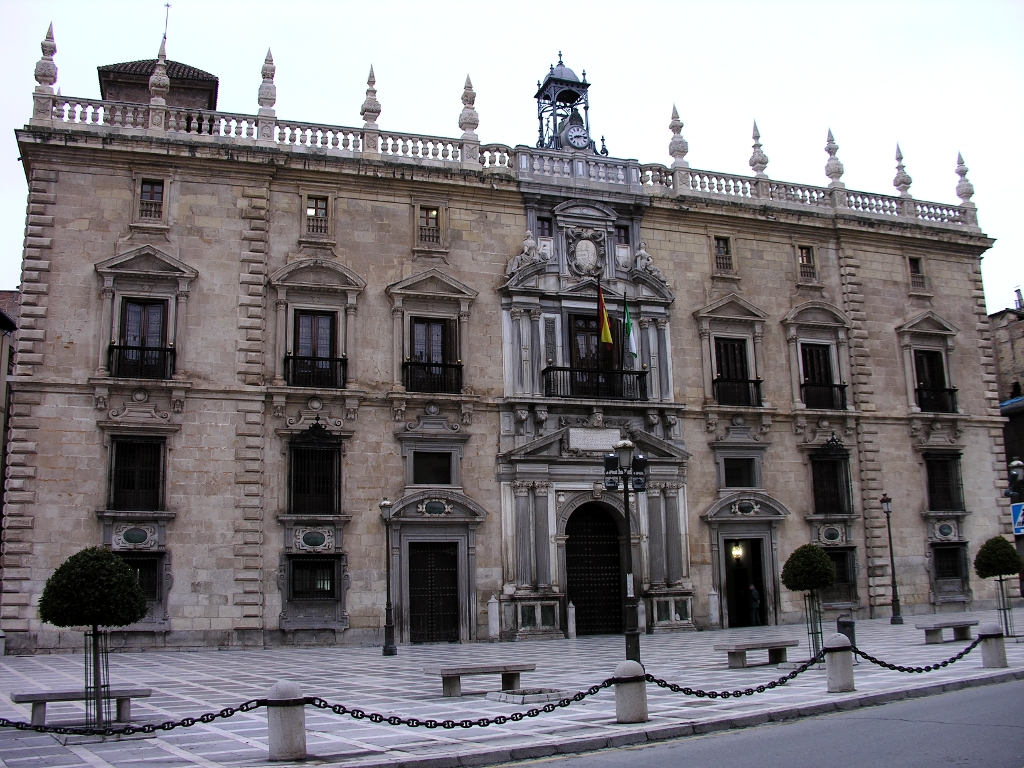